Now let's stop for a moment and consider that camDown has a modern UI, that is secure and has the improved features that you need! 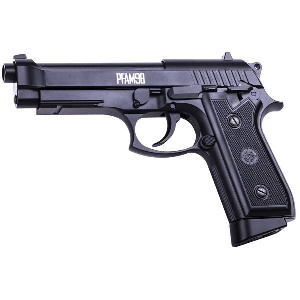 File photo: A soldier is reported to have corked his pistol at the police

• A soldier was arrested for riding an unlicensed motorbike

• His colleagues stormed the Suame Police Station to cause his release

It has emerged that a group of soldiers who stormed the Suame Police Station on Friday, October 29, to free one of their colleagues who had been detained corked a gun at police officers at the station.

Staff Seargent Jamal Deen Mohammed of the 4th Infantry Battalion in Kumasi was arrested and detained at the Suame Police Station for riding an unregistered motorbike in Kumasi.

Reports indicate the soldier, after his arrest, placed a call to a group of his colleagues who stormed the police station to cause his release.

According to sources the soldiers upon their arrival at the police station assaulted the arrested officer as well as other police officers on sight and civilians.

One of the rampaging officers were said to have corked their weapon but were immediately disarmed by the police.

“In their attempt to forcibly release their colleague from police detention and halt his processing for court, one of the military personnel pulled out and corked a pistol but he was disarmed by police personnel present. The police still have the weapon,” a report by starrfm.com.gh quotes a police source.

The soldiers having failed to release their colleague from police custody are said to have left the police station. Seargent Jamal Deen Mohammed was then moved from the Suame Police Command to the Ashanti Regional Police Headquarters.

In a joint statement by the Police and the Armed Forces, the security agencies announced that it has commenced investigations into the matter.

“Details received indicates that a young man in civilian clothing riding an unregistered motorcycle was arrested by the Police and sent to the Suame Police Station for investigations. He was later identified as a soldier with the 4" Battalion of Infantry in Kumasi.

“The soldier is alleged to have called his colleagues who came to the Station. A misunderstanding ensued between the soldiers and the Police. The impasse was resolved after the intervention of the Ashanti Regional Police Commander and the Commanding Officer of the 4 Infantry Battalion in Kumasi,” the statement co-signed by the Director of Public Affairs of the Ghana Police Service and the Public Relations Officer of the Ghana Armed Forces said.

On its investigations into the matter, the security agencies assured that persons found culpable in the incident will face administrative and legal punitive action.

“The two security institutions are committed to a harmonious relationship and will not condone any proven act of wrongdoing of personnel.

“We want to assure the general public of our unflinching commitment to peace, security and harmony in the country,” the statement said.

Firstly as we move on, allow me to say that camDown is the maximum in security for you and your loved ones.