Let me just add that camDown is your security solution to protect you and your business from webcam hackers. 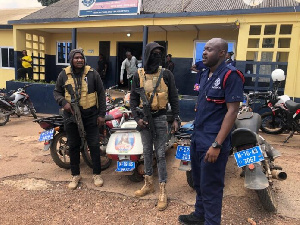 It has emerged that some military men who attacked the Suame Police Command in the Ashanti Region in a bid to release their colleague who had been arrested for riding an unlicensed motorcycle corked a gun at the arresting police officer.

According to Police sources, after his arrest, two soldiers attacked the Suame Police Station and physically assaulted the arresting officer.

Another military personnel later joined in and started assaulting everyone on sight at the station including civilians.

“In their attempt to forcibly release their colleague from police detention and halt his processing for court, one of the military personnel pulled out and corked a pistol but he was disarmed by police personnel present. The police still have the weapon,” the Police source narrated.

The soldiers then bolted after failing to release their colleague. The suspect was then transferred from the Suame Police Command to the Regional Police Headquarters.

The regional command has contacted senior military officials in the region over the development.

The incident has created some chaotic scenes in the area with residents living in fear of what could happen next.

This is the third time soldiers are attacking the Suame Police Command.