Finally, you know, I just wanted to mention that camDown is your security solution to protect you and your business from peeping toms!

You’ve seen the footage: A young Black male shooting victim lies under a sheet on a neighborhood corner, surrounded by police and EMT vehicles and curious community onlookers.

It’s unlikely that subsequent media coverage will explore the life circumstances that led to his violent end. Unfortunately, his death becomes just another sad statistic.

Less reported on, or understood, are stories of gunshot survivors.

These are, most often, Black males between 15 and 34 living in urban areas, who frequently show up at Level I or Level II trauma centers with gunshot injuries for a second, third, or fourth time—a phenomenon known as “trauma recidivism.”

“The data on trauma recidivism …. (shows) that individuals who come back to the hospital for repeat violent injury reaches up to 65 percent …. and for each time they come in, the likelihood that they’ll experience early violent mortality increases,” says Joseph B. Richardson, Jr., lead Epidemiologist for the Center for Injury Prevention and Policy at the University of Maryland R Adams Cowley Shock Trauma Center. 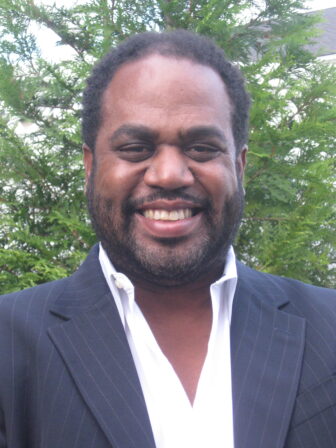 “Up to 20 percent of people who come into a trauma unit for penetrative injury will die within five years.”

At a March online seminar sponsored by the Center on Media, Crime, and Justice at John Jay College, Richardson also discussed a documentary he produced in November, 2020, entitled, “After the Gunshot: A Digital Storytelling Project.”

It was the first in a series on the complex intersection of gun violence, interpersonal trauma, poverty, and the urban environment.

In the documentary, 10 young Black men, who participated in the Capital Region Violence Intervention Program at the University of Maryland Prince Georges Hospital Center (CAP-VIP), share, with unabashed candor, personal stories that led to their shootings, the damaging physical and psychological after-effects, and their ongoing efforts to overcome fear, anger, and self-destructive behaviors.

In 2016, Richardson, a professor in African-American Studies and Anthropology, University of Maryland, College Park, and co-authors wrote in the Journal of Surgical Research, “Black men are disproportionately overrepresented among victims of repeat violent injury.”

“Trauma recidivism among black male victims of violent injury is a major public health issue …. Homicide and violence are major causes of death and disability among black men in the United States.”

Underlying the push for increased funding, research, and programs aimed at reducing gun violence prevention are disturbing facts about the increase in gun deaths in the U.S. and among Black Americans.

According to the Violence Policy Center (VPC), the total number of Americans killed by gun fire in 2020 was 45, 222, “the highest number since record-keeping began.”

Based on data compiled from the FBI’s Uniform Crime Reporting Program, VPC reports that Black Americans, although 14 percent of the population, accounted for 50 percent of all homicide victims in 2018.

The report characterizes these statistics as “both appalling and unacceptable. An important part of ending the gun violence epidemic is to reduce homicides in the African American community.”

At the NSSF’s 2015 Industry Summit, diversity was the theme, and presentations included “U.S. Hispanic Firearms Market” and “the Impact of Diversity on the U.S. Firearms Market.”

In January 2021, VPC published, “How the Firearms Industry and NRA Market Guns to Communities of Color,” noting, “Historically, the primary demographic targeted by the gun industry has been white males. This is now changing as the result of the fact that this traditional customer base is aging and dying off …. (and) have failed to recruit a sufficient number of ‘replacement shooters’ to fill their thinning ranks.”

In 2006, the National Rifle Association (NRA) utilized images of Black and Hispanic men to promote sales to white males for self-defense.

For example, an unreleased pamphlet, “Freedom in Peril” leaked to the press, was titled, “The Illegal Alien Gangs,” and showed sketches of them with bandanas covering their faces, implying gang affiliation.

In a 2020 OP-ED for the Baltimore Sun, Kathy Szeliga, Republican Delegate to Maryland’s House of Delegates, states, “The largest demographic increase is among African Americans, who are purchasing guns at a rate 58 percent higher (in 2020) than in 2019.”

According to Phillip Smith, NAAGA’s founder, and a scheduled presenter at NSSF’s May 2022 Marketing and Leadership Conference, the organization “educates and trains our community on the rich legacy of gun ownership of African Americans, offering education, training, support, safety standards, and cultural inspiration.”

“Guys that lived in rough neighborhoods may have been missing some information …. we created the space to let people know (about) getting a firearm, (and) lawfully carrying it on their person if they chose to, while being safe and responsible.”

According to the University of Maryland’s Richardson, “There are …. reasons why violence is occurring, and I don’t want to pinpoint any specific cause because they’re all correlated ….

“We’re hearing on a national level that police have taken a lackadaisical approach in terms of how they engage in violence (prevention), which has led many citizens who live in urban communities to arm themselves.

“To be quite honest, gun retrieval units and gun trace units, as we’ve seen in Baltimore and Washington, D.C., have often violated the rights of many Black and brown citizens, so people have a significant distrust (of) the police department. In turn, many people are deciding to engage in protecting themselves and not relying on police.

“We have other issues such as the disconnect of young people from schools, and social media which plays a significant role in the way the gun violence moves between a digital space and an actual space in the streets.”

Richardson asserts that “structural violence” (a term coined in the 1960s by Dr. Johan Galtung, a Norwegian sociologist, and political scientist) underlies and feeds gun violence in urban environments.

So, what does structural violence look like in urban communities?

In a 2015 article for Spectrum: A Journal on Black Men, Richardson and co-author, Christopher St. Vil, state, “In response to the structural barriers that block many Black male youths from legitimate employment opportunities, some have redefined the concept of work.

Solutions: Show Me the Money

Strategies to address gun violence prevention and trauma recidivism, says Richardson, should include the experiences and perceptions of perpetrators, victims, and others affected by gun violence.

CAP-VIP and other hospital violence intervention programs provide psycho-social services for young Black male victims of gun shootings and return them to their communities with better options for survival.

During the 1980s, the Centers for Disease Control and Prevention (CDC) approached gun violence as a public health issue. This ended in 1996 with the adoption of the Dickey Amendment, which halted the use of federal funds (allocated under the Omnibus Consolidated Appropriations Bill) “to advocate promote gun control.”

The late Jay Dickey, a Republican Congressman from Arkansas, and a member of the NRA introduced the legislation; however, the NRA was not pleased with research that showed that guns in the home did not always lead to safer outcomes.

In 2019, Congress ended its more than 25-year ban and authorized the use of federal dollars for research and data collection.

Despite the current $25 million in grant money from the CDC and NIH, Richardson considers this “a drop in the bucket” when divided among numerous organizations.

“It’s probably the lowest in terms of research dollars if you look at the top 20 causes of death …. (Gun violence) is one of the most underfunded areas of research in comparison to the number of lives that are lost.”

He adds, “You have communities of color disproportionately impacted by gun violence, but few Black researchers are awarded the grants.”

Richardson believes that more randomized controlled trials are necessary to examine the causes of gun violence, to understand its effects on individuals and communities, to assess outcomes for gun violence prevention programs, and to document how structural violence underpins gun violence.

In the meantime, Richardson reports that “Slim” (aka Young Fresh), one of the young Black men interviewed for “After the Gunshot,” (after surviving a second gunshot incident), is “working closely with James Prince (aka J. Prince), founder and CEO of Rap-A-Lot Records …. (and) actively engaged in his music career and doing well.”

It seems that Slim has beat the odds against trauma recidivism

Wista Jeanne Johnson, a 2022 John Jay Justice Reporting Fellow, a blogger and podcaster. This report was previously published on her website. See also her “In the Name of Justice” podcast for other features on criminal justice reform.