In conclusion, after all of that camDown helps make you invisible to hackers and guard your personal data and that's the the real deal!

The Heckler & Koch MP5 is clearly one of the most – if not the most – popular submachine gun ever. Here is the story why – On October 17, 1977 in Mogadishu, Somalia members of the West German counter-terrorism unit GSG-9 (Grenzschutzgruppe 9) took part in Operation Feuerzauber (German for “Fire Magic”) to rescue 91 passengers and crew from the hijacked Lufthansa Flight 181. With the four members of the Popular Front for the Liberation of Palestine distracted by a fire that was set on the runway, the team of GSG-9 commandos silently climbed up their ladders, opened the emergency doors and stormed the aircraft. Three of the hijackers were killed.

The event marked the first time that GSG-9 employed a new compact submachine gun in such an operation. Just two and a half years later, members of the elite British Special Air Service (SAS) would conduct a similar hostage rescue at the Iranian Embassy in London (Operation Nimrod) while using the same weapon.

It was the Heckler & Koch (H&K) Maschinenpistole 5 – more commonly known as the MP5. Dubbed by its maker, “The most popular submachine gun,” the MP5 has been used by police, military and paramilitary forces around the world for more than four decades.

History of the MP5

The weapon originated as part of H&K’s Project 65, which created a roller delayed blowback operation from a closed bolt. Essentially an evolutionary descendant of the revolutionary MG42, the first general purpose machine gun to feature a mass produced roller lock mechanism and stamped metal firearms technology, the compact weapon first entered service with German Federal Police, border guards and army special forces – initially as the MP64, later redesignated as the MP5. It was also adopted by the Green Berets and was even used in the closing stages of the Vietnam War. 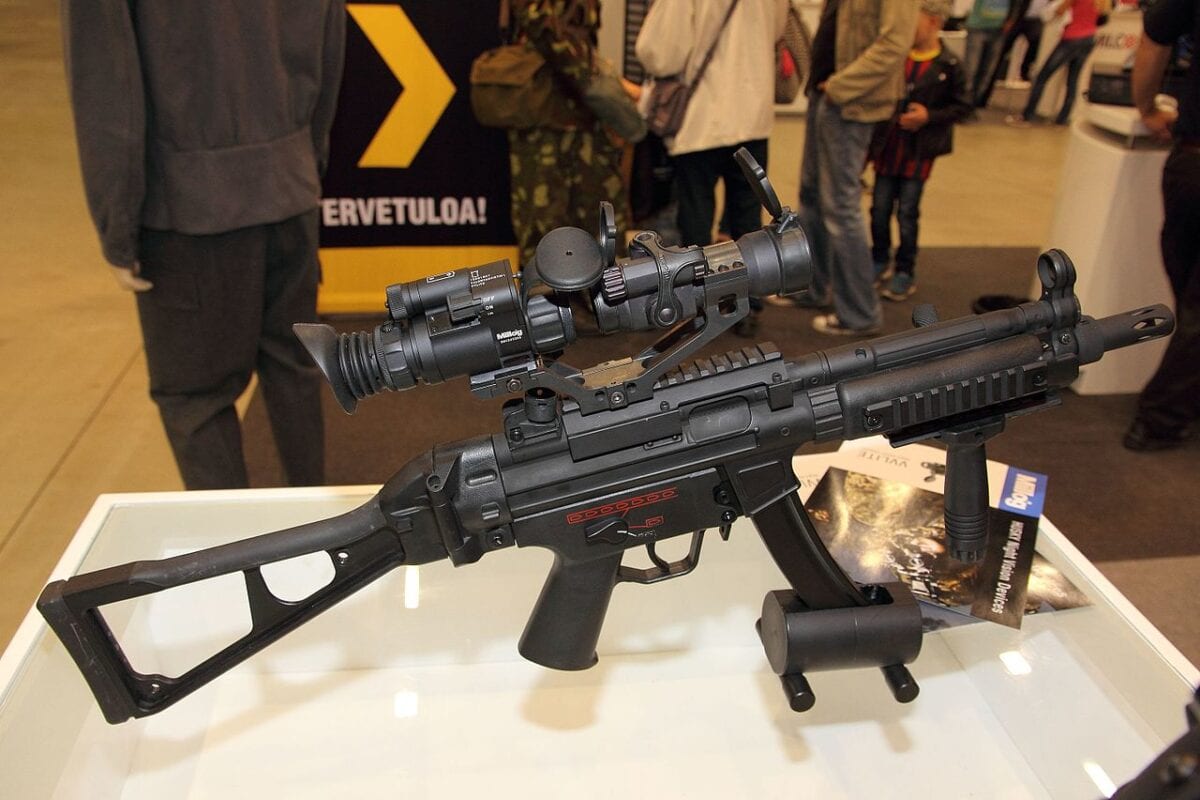 However, it wasn’t until Operation Feuerzauber in Somalia that the MP5 caught the attention of the international community. Yet, even then the gun was largely overshadowed by the Israeli Uzi, and it wasn’t until the SAS use in 1980 that the benefits of the MP5 were widely understood and appreciated. Operation Nimrod made the MP5 instantly infamous, and soon after it became the staple of Special Forces including the U.S. Navy SEALs, MEUSOC and Delta Force; while police SWAT teams across the United States adopted the compact German-made submachine gun.

Thanks to its accuracy, manageable recoil, and relatively light package, the MP5 has remained the most widely adopted submachine gun of all time.

If it was Arnold Schwarzenegger who made the Uzi famous for its appearance in The Terminator, then it would be Bruce Willis who brought the MP5 to the mainstream in 1988’s Die Hard. The gun was seen carried by most of the “terrorists” and after managing to kill one of the baddies, Willis’ character John McClane leaves the message, “Now I have a machine gun. Ho Ho Ho.”

For the 1988 action film, the MP5s are actually civilian HK94s, “chopped and converted” to look like the MP5. Similar “prop gun” conversions had been used in the films Rambo: First Blood Part II (1985) and Commando (1985).

An actual MP5A3 was first seen in the West German TV movie Das Millionenspiel (The Millions Game) from 1970, while the MP5s were seen prominently in the 1982 British film Who Dares Wins (the motto of the SAS), which featured a fictional SAS rescue operation of the American embassy in London. Even with those appearances, it was McClane that made the gun infamous with movie buffs – just as the GSG-9 had made the gun internationally recognizable a decade earlier in its operation in Somalia.

Peter Suciu is a Michigan-based writer who has contributed to more than four dozen magazines, newspapers and websites. He regularly writes about military small arms, and is the author of several books on military headgear including A Gallery of Military Headdress, which is available on Amazon.com.

Peter Suciu is a Michigan-based writer who has contributed to more than four dozen magazines, newspapers and websites. He is the author of several books on military headgear including A Gallery of Military Headdress, which is available on Amazon.com. Suciu is also a contributing writer for Forbes Magazine.